Counteracting The Rise of Generic Pricing

Increases in the prices for many generic medications had a negative impact on many stakeholders in the healthcare industry. Within workers’ compensation specifically, higher average wholesale prices (AWPs) for generics in some cases are driving higher per-claim prescription related costs for payers.

A number of possible contributors to rising generic prices have been proposed, including increased barriers or delays to generic entry in the current market. It is estimated that the U.S. Food and Drug Administration (FDA) approval time for abbreviated new drug applications (ANDAs), the process under which generics are approved, has increased since 2013. Drug shortages that may be the result of manufacturing issues or increased regulation on generic manufacturers have also been suggested.

But how do any of these explain the case for a product such baclofen? The AWP for generic baclofen has risen as much as 150% since 2013 depending on pill strength, one of the highest generic inflation increases observed among products prescribed to Healthesystems claimants.1 Baclofen is a skeletal muscle relaxant and antispastic medication that serves as a generic therapeutic alternative to brands such as Flexeril®, Zanaflex® or Soma®. It also has a different mechanism of action and typically causes less sedation than other muscle relaxants. For these reasons, it is a product that Healthesystems sees commonly utilized among workers’ compensation claims. Suddenly, what used to be a cost effective and clinically appropriate product is becoming a financial concern for payers. And the drug’s availability doesn’t seem to be the cause. Baclofen is produced by multiple manufacturers. It is not on the FDA’s current drug shortage list. So why has the AWP increased so dramatically for a product like baclofen, as well as many other generics?

This is the question that Congress is trying to get answers to due to the impact of generic price increases on the Medicaid program. At their request earlier this year, the U.S. Department of Health and Human Services (DHHS) launched a review of generic drug price increases spanning the last decade.2

This is not only a Medicaid issue, however, and generic price concerns are impacting stakeholders in every corner of the healthcare world. While Congress was prompted to act based on data indicating that prices for certain generics had risen as much as 1,000% or more,3 the rise has not been as dramatic for the majority of products. But even more modest increases have made a notable impact on overall claim costs, especially over the last few years. In many cases, such as the baclofen example, it has also been seemingly unsubstantiated.

While drug manufacturers cite approval backlogs and other barriers as drivers of increased prices, their own actions are contributing to the trend as well. Generic consolidation could be a contributor to price increases, as less product competition de-incentivizes competitive pricing. This year, Teva Pharmaceutical Industries Ltd. had made strong efforts to acquire Mylan NV, one of the largest global generic and specialty drug manufacturers. Had the deal come to fruition, it would have made Teva the largest pharmaceutical manufacturer globally and merged an incredible amount of market share for generic drugs under one roof. And with increased market share comes increased pricing power. 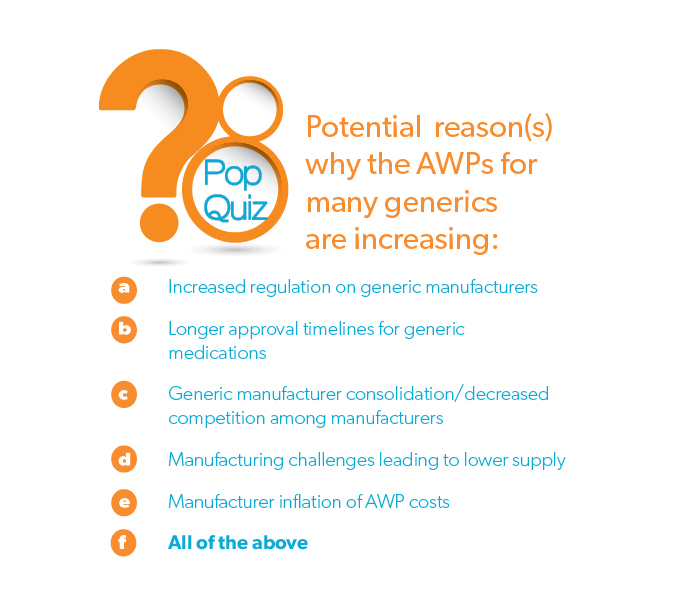 HOW CAN RISING COSTS BE CONTROLLED?

It is important to have visibility into the factors driving overall cost and trend of prescription medications. Generic prices are just one component of this. Thus it becomes increasingly important to use various strategies to reduce other components of pharmacy trend that can help mitigate the increases caused by rising generic AWPs while focusing on patient care. Payers can work with a PBM to put programs in place to address other factors that impact cost, such as appropriate drug utilization, patient safety, and drug mix.

The article in this issue, Making the Most of Drug Utilization Management Tools, demonstrates the exceptional impact that aggressive and early application of clinical management tools can have on the care of injured workers and associated costs.