The results garnered by implementation of closed drug formularies in states that include Texas, Ohio, and Washington have additional states considering how a closed formulary could work in their system. Even with these state-mandated reforms in place, the role of payers and pharmacy benefits managers (PBMs) remains important when managing drug utilization and costs in workers’ comp.

Several states are now looking at adopting drug formularies for workers’ compensation claims in an effort to improve patient care and control costs. The concept of a closed formulary is not new to workers’ compensation payers, as carriers have been partnering for years with PBMs to develop evidence-based recommendations and parameters to help guide medically appropriate and cost-effective medication use in the injured worker. However, adoption of closed drug formularies on a state-mandated level has been initiated only in the last decade. Washington state was the trailblazer, having adopted their closed formulary in 2004. Other monopolistic states have followed with the same approach. But Texas was the first of the open market states to implement the concept in 2011 utilizing the Official Disability Guidelines (ODG) closed formulary list. Their results have been both impressive and well publicized.

Within a year of its 2011 closed formulary implementation, the Texas Division of Workers’ Compensation reported a 50% decrease in the prescribing of “N” status drugs during the acute phase of care.1 They also reported a two-thirds reduction in overall use of these drugs for all claims within the first six months of formulary adoption. The ODG list of “N” status drugs currently includes approximately 160 “not recommended” medications that require preauthorization based on demonstrated medical need. The list includes both opioid and non-opioid agents, and considers factors such as patient safety (risk of misuse, addiction, adverse events) and cost (clinically comparable, lower-cost alternatives available).2

The Texas Department of Insurance (TDI) Workers’ Compensation Research and Evaluation Group has continued to report annual data demonstrating the impact of the reforms. Most recently, a February 2015 report demonstrated a 76% reduction in “N” status drug prescriptions in new claims, and an 82% decrease in prescribing of the ten most commonly prescribed “N” status medications, which include opioid analgesics, nonsteroidal anti-inflammatory drugs (NSAIDs) and musculoskeletal relaxants.3

The reductions in utilization translate into a cost reduction of 83% for “N” status drugs. Perhaps most notably, the savings were not limited to new claims following the 2011 formulary implementation. Legacy claims, which became subject to the closed formulary beginning September 2013, also saw an immediate drop in prescribing of N-drugs and an associated cost decrease. This is important because legacy claims in Texas account for more than half of total pharmacy cost; therefore, having a significant impact on the overall workers’ compensation system requires reducing costs among this older population of claims as well as new claims. Texas has been able to successfully effect change within both of these populations.2,3 The larger impact of reduction in “N” status drugs is reflected in the 11% decrease in total pharmacy costs observed between 2011 and 2013.2

It is no surprise that other states regulators are paying attention to these outcomes, which are not exclusive to the state of Texas. In early 2014, the Ohio Bureau of Workers’ Compensation (BWC) reported a total pharmacy drug savings of more than $20 million since formulary implementation in 2011.4 The BWC also reported a decrease in opioid doses of 10.9 million, reflecting the positive benefits of formulary on patient care and safety, as well as cost.

A number of states have looked at how a closed formulary could work in their system. Delaware adopted its Medicaid-based “preferred drug list” with some modifications for workers’ compensation in late 2013. Oklahoma adopted the ODG formulary with a few modifications in 2014. In 2015, California, Montana, Nebraska and North Carolina are considering legislation to require a closed formulary. Arkansas and Tennessee are already in the process of developing rules which would implement a closed formulary. It has been estimated that implementation of a Texas-like formulary could decrease total prescription costs up to 29% in some states,5 and the California Workers’ Compensation Institute (CWCI) estimates that adoption of a prescription drug formulary could save the state an estimated $124 million to $420 million annually.6

EVOLVING ROLES OF PAYERS AND PBMs

Adoption of a closed drug formulary has proven to have a measurable and significant impact on utilization and costs within workers’ compensation. Implementation of formularies through state mandate supports the payer’s efforts to control the prescribing of high-cost, high-risk drugs such as opioid analgesics and benzodiazepines. It also brings the added benefit of applying a consistent and universal framework for these decisions throughout the state.

However, prescription drug formularies are not a cure-all, and additional tools and strategies should be employed by payers and PBMs to optimize potential outcomes. Part of the success demonstrated by Texas included efforts to identify and educate high-prescribing physicians to help change prescribing habits. This is a tool that Healthesystems employs with high rates of success (see Reading Between the Lines of a Workers’ Comp Claim).

The model of an “N” and “Y” list to denote exclusion or inclusion in a formulary lacks a degree of specificity that takes into consideration the individual patient or injury type. The inclusion of a medication on the list does not guarantee its clinical appropriateness for a given patient. There still must be a level of oversight that is monitoring the appropriate care of injured workers on a claims-level basis that a state formulary may be unable to provide. Partnering with a PBM can help payers to contain pharmacy costs while also ensuring evidence-based care for the injured worker claimant. 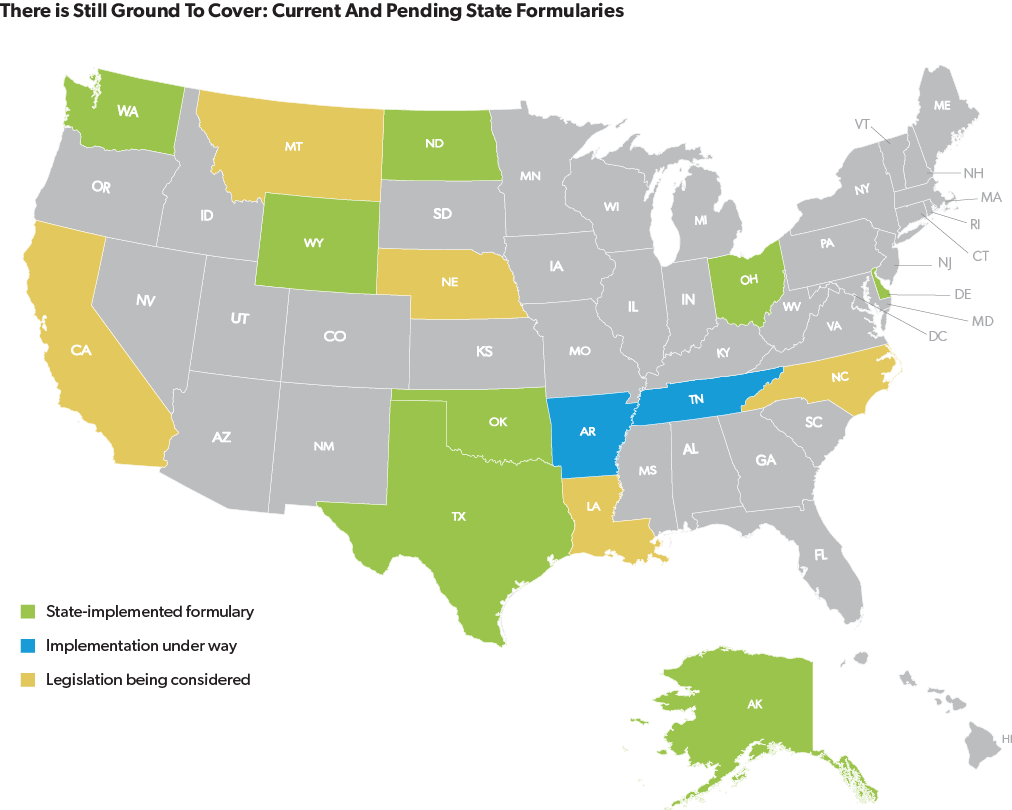 At the time this publication was in press, Healthesystems’ Director of Regulatory and Legislative Affairs, Sandy Shtab, moderated a panel presentation on the topic of closed drug formularies at the International Association of Industrial Accident Boards and Commissions (IAIABC) Spring Forum. Healthesystems is highly engaged in advocating for good public policy to improve patients’ medical outcomes while controlling costs. For more information on the issues that impact the workers’ compensation community, visit www.healthesystems.com/news.