Abuse-deterrent technology: The safest opioid is the one left unprescribed

The end of 2014 through 2016 introduces a number of new opioid analgesics with abuse-deterrent labeling. The issuance of FDA guidance regarding these products brings some clarity regarding evaluation criteria for abuse-deterrence studies and product claims. What remains unclear, however, is the impact these products have on reducing prescription pain medication misuse among injured workers.

The approval of a new, tamper-resistant formulation of OxyContin® in 2010 marked the first instance the U.S. Food and Drug Administration (FDA) allowed a manufacturer to describe abuse-deterrent features within an opioid product label. Since then, a number of drug manufacturers have come forward with abuse-deterrent formulations of pain medications, which are defined by the FDA as having properties shown to meaningfully deter abuse, even if they do not fully prevent abuse. However, there has remained some ambiguity around the criteria required to achieve an abuse-deterrent label. In 2013, the FDA issued a draft guidance for industry, Abuse-Deterrent Opioids — Evaluation and Labeling, in an effort to clarify its perspective regarding abuse potential studies and the requirements for including abuse-deterrent claims within a product label. The final version of this guidance was released in April 2015; in it, the FDA defines different categories of abuse-deterrent formulations and how they work to discourage abuse (see Figure: FDA-Defined Categories of Abuse-Deterrent Technology below). The agency also discusses their process for evaluation of a product’s pre-marketing and post-marketing studies, which respectively determine a product’s potential for abuse deterrence and demonstrate measures of real-world impact.

All opioid products currently approved with abuse-deterrent features fall into just two of five FDA-defined categories: physical/chemical barrier and agonist/antagonist combination (see Figure: FDA-Defined Categories of Abuse-Deterrent Technology below). These two types of existing technology may be effective in discouraging product manipulation for specific purposes, such as intranasal or intravenous use — either through tamper-resistant features that make product manipulation difficult, or by lessening the euphoric feeling conferred by the manipulated product. However, they fall short in a critical area. While restricting the ability to dissolve or crush the product may impact specific methods of street use (e.g., snorting, injecting), these forms of technology are unable to address the number one method of abuse, oral ingestion. The FDA acknowledges this shortcoming in its 2015 industry guidance.1 The reality remains that tamper-resistant features that only discourage non-oral routes of ingestion target only a small fraction of abusers, limiting the overall impact. According to the National Addictions Vigilance Intervention and Prevention Program (NAVIPPRO) database, only 1% of hydrocodone abusers inject the drug.2 This reality is also highly relevant among the injured worker population, where forms of misuse most frequently manifest as overutilization of unaltered pills, or through selective adherence to opioid analgesics while not adhering to other medications and/or facets of the overall therapeutic plan (e.g.,patients who continue to use or overuse opioid analgesics while ignoring medications that treat their underlying condition, such as nonsteroidal anti-inflammatory drugs (NSAIDs) for inflammation or appropriate anticonvulsants/antidepressants for neuropathic pain).

A TIMELINE OF ABUSE-DETERRENT OPIOIDS2-11 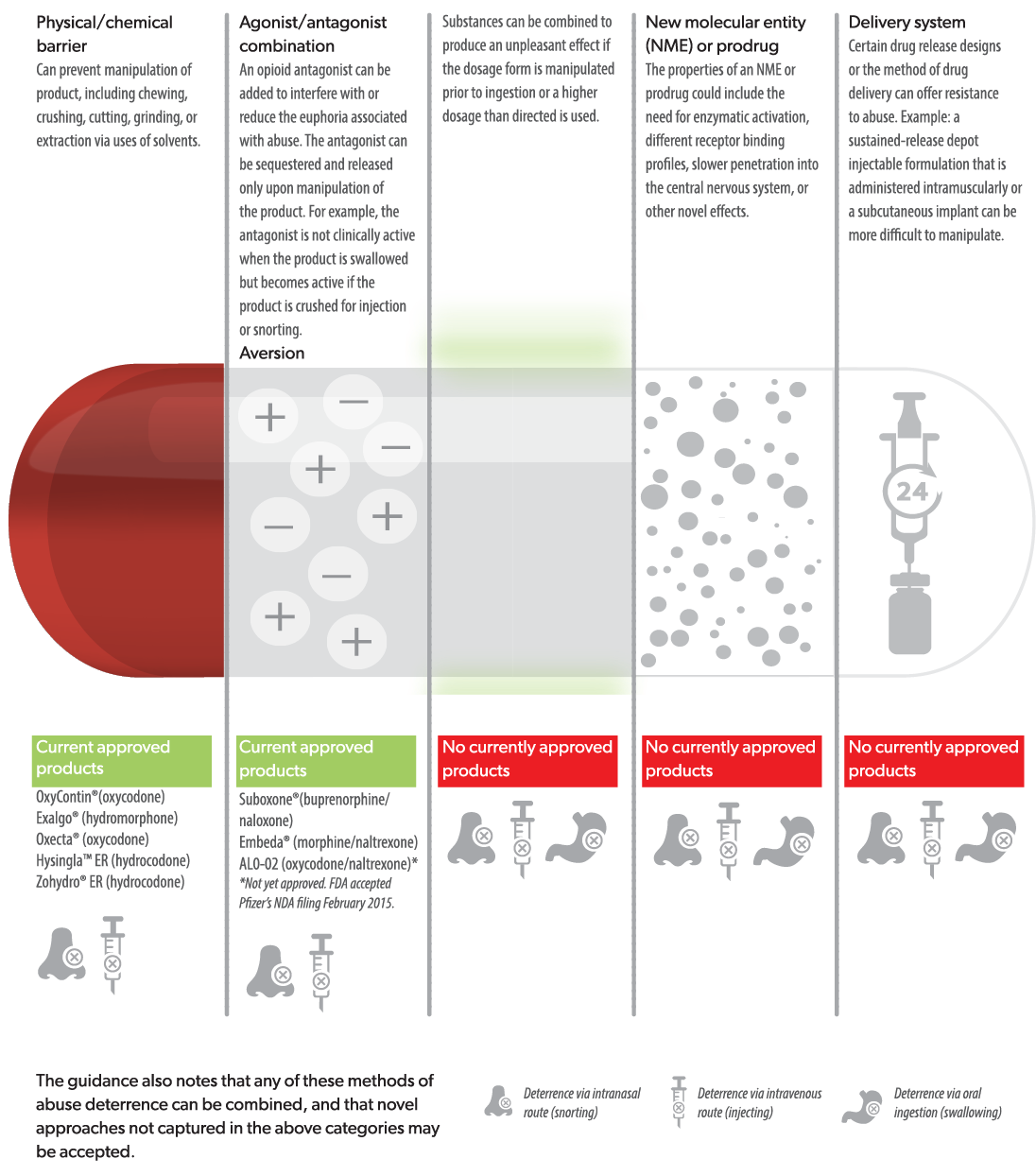 “Most abuse-deterrent technologies developed to date... have not yet proven successful at deterring the most common form of abuse — swallowing a number of intact pills or tablets to achieve a feeling of euphoria.”

To date, a number of pre-marketing studies have earned some opioid products abuse-deterrent labeling. These studies are based on the potential for a product to discourage abuse, and while the FDA does outline scientifically rigorous study design parameters, pre-marketing abuse potential studies are primarily conducted in small groups of non-dependent (recreational) opioid abusers.3,9 This sample population is problematic when attempting to translate the results within workers’ compensation, where dependence and addiction factor heavily into misuse among injured workers who are over-utilizing prescription narcotics for chronic pain management rather than for recreation. In the United States, 9 million persons report long-term medical use of opioids and 5 million persons report nonmedical recreational use. These groups represent the two largest populations at-risk for prescription drug overdose in the United States. Yet pre-marketing abuse potential studies only include recreational users and fail to represent a large segment of patients who may be at risk for drug misuse and/or overdose.12

However, the even larger struggle for drug companies has been to provide post-marketing evidence that their products produce a meaningful impact on abuse, a factor that should become increasingly important to product evaluation as abuse-deterrent formulations gain more clinical experience with passing time. The recent FDA approval of reformulated Zohydro® ER with BeadTek™ came with an FDA request for drug maker Zogenix to submit post-marketing data within the second half of 2015 in order to receive an amended label. Similarly, the FDA requested that Purdue Pharma conduct post-marketing studies to analyze the effects of abuse-deterrent characteristics of Hysingla™ ER on its potential risk for abuse, as well as the impact of this risk in the general population.13

Post-marketing studies that have been published to-date seem to indicate not a lessening of abuse, but rather a shift from abuse of one substance to another. A study published in 2013 analyzed changes in oxycodone and heroin exposures in the National Poison Data system after market introduction of the abuse-deterrent formulation of extended-release OxyContin®. Results indicated a decrease in abuse of extended-release OxyContin® following reformulation. However, the corresponding increase in abuse of other oxycodone formulations and heroin indicate that the abuse isn’t being addressed, it’s simply being shifted.14 The results analysis also fails to parse out the method(s) of abuse utilized by the population studied. Given the large shift to heroin abuse, one may infer that a large portion of the study population abused intravenously. The results of this study therefore would be difficult to apply within workers’ comp as the populations and methods of abuse are arguably different. Regardless of the medication mix, opioid misuse and abuse still remain a significant challenge in treatment of the injured worker. Only time will tell how significant of a presence the newly approved abuse-deterrent opioids will have in workers’ comp, as some of these products have not yet entered the market.

Trends analysis can be helpful within claimant populations to help identify potential opioid misuse. For example, are there any patients or prescribers who are specifically requesting a non-abuse-deterrent formulation of a medication? When a new abuse-deterrent product enters the market, do prescribing trends shift? 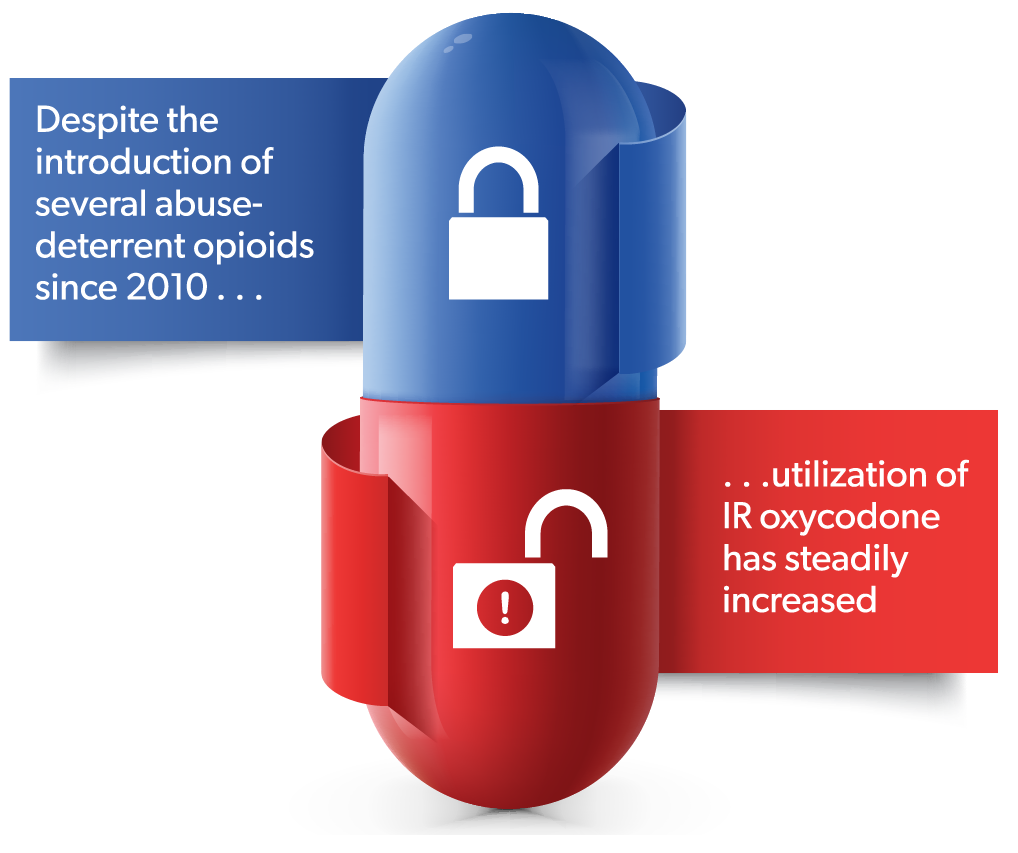 The ability to analyze these trends among specific populations can help uncover potential misuse among injured worker claimants. Healthesystems data have demonstrated a change in prescribing trends following introduction of an abuse-deterrent opioid at multiple time points. The period following introduction of abuse-deterrent OxyContin® in July 2010 reflected an increase in IR oxycodone prescriptions, indicating a shift in utilization toward non-abuse deterrent oxycodone among a segment of patients and/or prescribers. When Opana® ER was replaced on the market with a new, abuse-deterrent-formulation in 2012, IR oxycodone prescription rates rose even higher.15

The continued increase in IR oxycodone prescriptions, despite the introduction of several abuse-deterrent opioids, suggests that abuse-deterrent products are not having the intended overall impact on abuse. Resources should instead be focused on comprehensive pain management programs.

Evzio® and the sobering reality of opioid abuse

Ideally, opioid abuse among injured workers is prevented through comprehensive pain management strategies that include both pharmacologic (non-opioid wherever possible) and non-pharmacologic components. This is the purpose of evidence-based recommendations, and nowhere is implementation of these recommendations more critical than in the medical management of the injured worker.

Unfortunately, statistics draw a stark contrast between this ideal and the current reality. Drug overdose deaths are now the leading cause of injury death in the United States, and this statistic is largely driven by prescription drugs.16

In April 2014, the U.S. Food and Drug Administration (FDA) approved Evzio®, the first naloxone auto-injector intended for use by a patient, family member, or caregiver in the event of opioid overdose. Until this approval, naloxone has been used in emergency room or ambulatory settings by trained medical personnel only.

Proponents of the device argue that it will facilitate earlier administration of naloxone in an overdose situation. The Evzio® promotional website positions the product as “an additional safeguard” for patients in their pain management journey. That these safeguards are even necessary helps underscore the high level of risk associated with opioid analgesic treatment and why evidence-based guidelines discourage prescribing these powerful and potentially addictive narcotics in the large majority of patients.

While the approval of Evzio® may potentially save the lives of individuals at risk for opioid overdose, it should also serve as a somber reminder to everyone involved in the medical management of injured workers:

We can do better.