States have taken varied approaches to regulating use or possession of marijuana. At the federal level, marijuana remains an illegal substance under the Controlled Substances Act. This conflict between state and federal regulations could pose challenges for workers’ compensation in the future.

California became the first state to legalize the medical use of marijuana when voters passed Proposition 215 in 1996. Advocates claimed victory on behalf of terminally ill patients and others enduring chronic pain even as critics argued that the campaign represented little more than a ruse to legalize recreational use.

Policy disagreements have continued and proponents of medical marijuana have carried the day. Those in favor of legalization claim that medical marijuana can be used to alleviate symptoms of everything from chronic pain to AIDS to Alzheimer’s disease. American voters and their elected officials watched commercials featuring suffering patients and largely decided in favor of legalization.

As of the beginning of 2014, 20 states and the District of Colombia legalized the use of marijuana for medical purposes. Bills were filed in 17 additional states to legalize marijuana for medical purposes. Colorado and Washington authorized recreational use under specified guidelines. Maryland and Alabama took the unusual step of passing legislation that allows the medical need for marijuana to be used as a legal defense for possession charges, though marijuana use and possession is not legal in those states. Four other states have similar legislation pending. See map below. 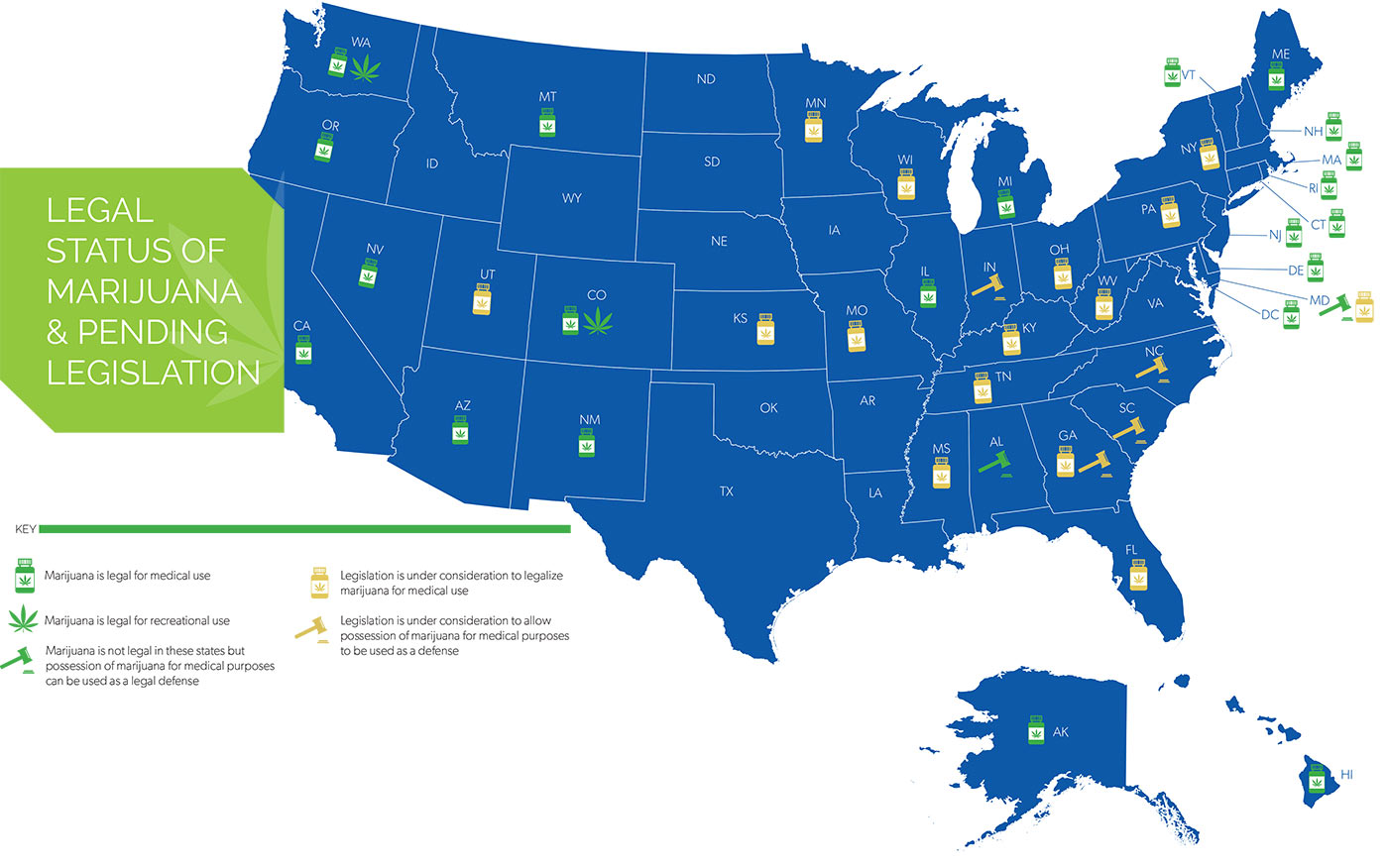 Despite legalization efforts by various states, the status of medical marijuana has remained somewhat cloudy due to conflicting federal and state law. Marijuana remains an illegal substance under the Controlled Substances Act. Because it is a Schedule I controlled substance, physicians cannot write a prescription for it. Physicians “recommend” or “refer” a patient for treatment rather than prescribe marijuana in states where medical use is legal.

In 2013, the Department of Justice issued an update to its marijuana enforcement policy indicating that it would defer to the regulatory schemes of states that have adopted legalization programs. Federal regulators have also taken steps to clear the way for businesses engaged in state-authorized marijuana business activities to use the banking system without fear of federal recrimination.

While support for medical marijuana is gaining steam, two reputable organizations are standing strong against legalizing marijuana. The American Medical Association (AMA) recently reaffirmed its opposition stating that “cannabis is a dangerous drug, and as such, is a public health concern.”1 A position paper released by the American Psychiatric Association (APA) stated “medical treatment should be evidence-based and determined by professional standards of care; it should not be authorized by ballot initiatives.”2 The APA paper also included a thought-provoking statement about the lack of any FDA-approved drugs that are smoked. The Drug Enforcement Administration (DEA) also upholds its position that “smoked marijuana is not medicine.”3

Approved sources for marijuana vary by state. It can be obtained in dispensaries, through personal cultivation or directly from a caregiver — though some state laws remain silent on where marijuana can be purchased. Currently, billing is not processed through traditional retail pharmacies and Healthesystems has not processed any claims for medical marijuana.

Some states permit a licensed pharmacist to own or run a marijuana dispensary. Connecticut law mandates that a dispensary be run by a state-licensed pharmacist.4 New bills have been proposed in some states to allow marijuana to be dispensed in a pharmacy. The Michigan Senate passed a bill that would allow pharmacies to dispense marijuana; however, an integral part of the legislation will likely block implementation. It requires a reclassification of marijuana to a Schedule II substance by the Drug Enforcement Administration — a move that is not expected anytime in the near future, if ever.

Close monitoring is needed to determine if injured workers are using marijuana, regardless of the source. Such use is likely escaping the safety checks provided by pharmacists and PBMs.

In most states where medical marijuana use is legal, users are required to register. California and Maine make registration voluntary and Washington has no registration requirement. Some states accept other states’ registration ID cards. If and how many claimants currently receive self-paid medical marijuana is largely unknown. This raises the concern for potential drug-drug interactions, drug-disease interactions, and possible abuse that are unidentifiable to payers.

While the continued illegality of marijuana at the federal level has provided payers with ample reason to decline to cover medical usage, it will be interesting to see if the evolving federal position will make such blanket denials more problematic in the long term. In the short term, the lack of FDA approval, combined with the fact that marijuana lacks the clinical trials required of all FDA-approved drugs, provides considerable protection for payers who do not wish to cover it.

The IAIABC Survey of Medial Marijuana and Workers’ Compensation lists states with specific rules regarding the payment of medical marijuana for injured workers. According to the April 2013 survey, Michigan, Montana, and Vermont have rules in place that allow or mandate denial of coverage for medical marijuana under workers’ compensation.5 The survey also lists examples of disputes regarding compensation for medical marijuana or related expenses such as registration fees or out-of-pockets costs related to a person growing his or her own marijuana plants. Court decisions have been inconsistent and rulings have been found in favor of both claimants and payers. Healthesystems will continue to monitor and report on legal changes and challenges.