Future Opioids and the Injured Worker: Why “SAFER” is a Relative Term

ANOTHER YEAR, ANOTHER MILESTONE.By the latest CDC tally, the year 2015 saw more than 33,000 opioid overdose deaths, two-thirds of which were attributed to prescription opioids.1

More than ever these statistics crystalize the need to explore and develop alternative chronic pain therapies. Yet pharmaceutical R&D seems determined to continue introducing new opioid products to the market, and the Food and Drug Administration (FDA) remains willing to approve them. Thus far in 2017, we have already seen approvals for two new long-acting opioid products for treatment of severe pain, Arymo® ER (morphine sulfate) and Vantrela® ER (hydrocodone bitartrate), with additional products on the horizon.

It is true that a concerted effort is underway (for a variety of reasons, and not all of them altruistic) to make future opioid products safer. Many products either recently approved or undergoing clinical trials have been developed with a greater emphasis on reducing patient risk, through measures that include abuse-deterrent formulations, improved side-effect profiles, and diminished addictive properties.

But “safer” is a term relative to the population to which it's being applied. And in workers' compensation – a patient population that is commonly managed with opioid therapy to treat pain associated with workplace injury – these newer opioid products have thus far been unable to demonstrate a significant safety benefit. Primarily, they do not address the underlying risks and drivers of misuse in workers' compensation patient populations.

There are important differences characterizing the recreational abuse of prescription opioids when compared with the clinical misuse that can occur within workers' compensation. It would be naÏve to imply that recreational abuse doesn't occur among workers' compensation patients. But by and far, injured workers don't initiate therapy with the intent to abuse. Instead patients may find themselves navigating a slippery slope as they increasingly rely on opioids to cope – with their pain, with depression, with the very difficult task of accepting that the injury they've incurred means that their life and their livelihood may never quite look the same.

This reliance can translate into misuse if a patient is using opioid medications in clinically inappropriate ways (e.g., for longer periods of time than recommended, or taking their opioid medications at higher dosages or more frequently than prescribed by their doctor). These methods of misuse often boil down to taking too many pills, too often, and for too long. Conversely, recreational abuse is often hallmarked by methods of use intended to enhance the high: crushing, grinding, or otherwise manipulating pills in order to snort or inject the opioid product for faster absorption into the body. These key differences come into play when evaluating the potential risks of current and future opioid products within the injured worker population.

To date, efforts to bring safer opioids to market have largely centered on abuse-deterrent formulations. The FDA defines abuse-deterrent opioids as having properties shown to meaningfully deter, though not fully prevent, abuse. By this definition, the clinical misuse that occurs more commonly in the workers' comp population becomes an unaddressed issue, because abuse-deterrent opioids are developed with the recreational abuser in mind. Abuse-deterrent opioids commonly feature technologies that either physically prevent manipulation of the tablet or capsule (chewing, crushing, grinding, or extraction), or reduce the euphoric effects of the opioid when such manipulation occurs. Currently there are no abuse-deterrent formulations that reduce or remove euphoria when a patient swallows more intact pills than were prescribed, more frequently than directed, or remains on therapy for longer than clinically necessary or beneficial. Ultimately, these formulations just add increased costs to the pharmacy bill without providing a safety benefit for the injured worker.

Will future opioids offer more promise in deterring misuse? Maybe – with a side of caution. Although current abuse-deterrent technologies don't address oral misuse, it's not out of the question that they eventually will. FDA guidance allows for technologies that could potentially deter oral misuse – such as formulations that trigger unpleasant effects if a higher-than-directed dosage is ingested, or specialized delivery systems that remove patient behavior from the equation.

Drug manufacturers are also exploring ways to preempt addiction, studying opioids with greatly diminished euphoric effects that are being dubbed “non-addictive” opioids. Whether these products successfully live up to this name – and more importantly, whether they provide any subsequent safety benefit within the injured worker patient population – remains to be seen.

Even when misuse is not a factor, opioids pose significant health concerns. Opioids come with a host of side effects that negatively impact a patient's quality of life, delay the course of recovery, and dramatically increase the cost of their medical care. Opioid-induced constipation (OIC), a common and potentially debilitating side effect associated with opioids, can double a patient's healthcare costs in the first year following initiation of their opioid therapy due to factors that include increased physician office visits and hospital admissions.2

Another important consideration in the injured worker population is the impact of opioid side effects on workplace safety. Patients who continue opioid therapy upon their return to work may suffer sedation, dizziness, and impaired function, all of which can present risks in certain work environments and inhibit the ability to perform skilled tasks.

For all of these reasons, it seems to follow that opioids with improved side-effect profiles could prove beneficial among the injured worker population, and there are products in development that promise these benefits (see inside spread). But their potential benefits must continue to be carefully weighed against the overall risks. While reducing a side effect such as nausea or vomiting could improve a patient's quality of life, it fails to address concerns such as addiction, overdose, or workplace safety. So the best solution may be discontinuing opioid use and starting alternative forms of treatment, rather than replacing with a different opioid medication, regardless of its differentiated side-effect profile.

With all of the societal and healthcare damages inflicted by opioids, it feels unlikely that the most effective solution is … more opioids. Yet they are being positioned as at least a part of the solution. A number of states currently have bills proposed that, if passed, will require insurance coverage for abuse-deterrent formulations of opioids.3 Some workers' compensation insurers are feeling the costly sting of these products without seeing a resultant benefit for their injured worker patients. Costs that could instead be allocated to other treatment modalities that go beyond pain management and more effectively treat the patient's condition or injury.

The workers' compensation industry has put forth enormous efforts to tackle the opioid problem, and finally with some measurable success, as opioid prescribing rates have begun to decline in recent years.4 So while future opioids may offer some potential improvements over older formulations, it is not surprising that our industry views them with extreme caution and trepidation. For those of us dedicated to the safe and effective care of injured workers, opioids remain the enemy, not the answer. 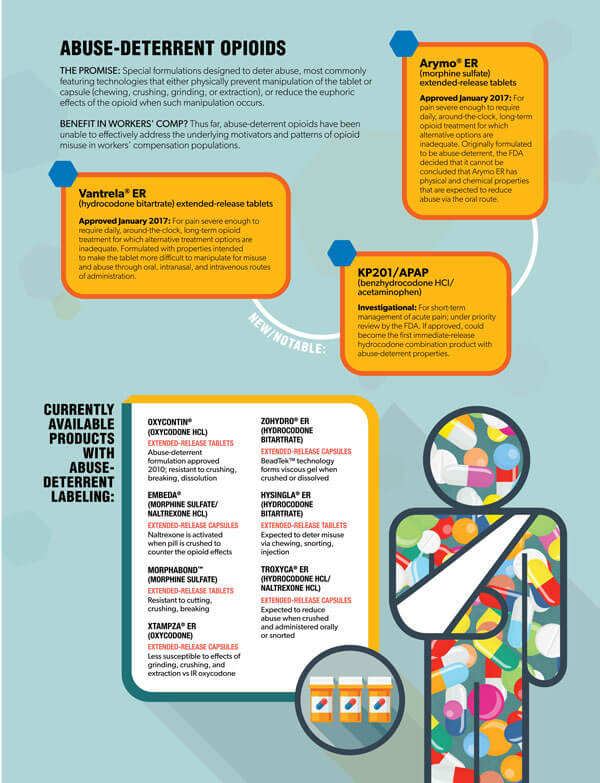 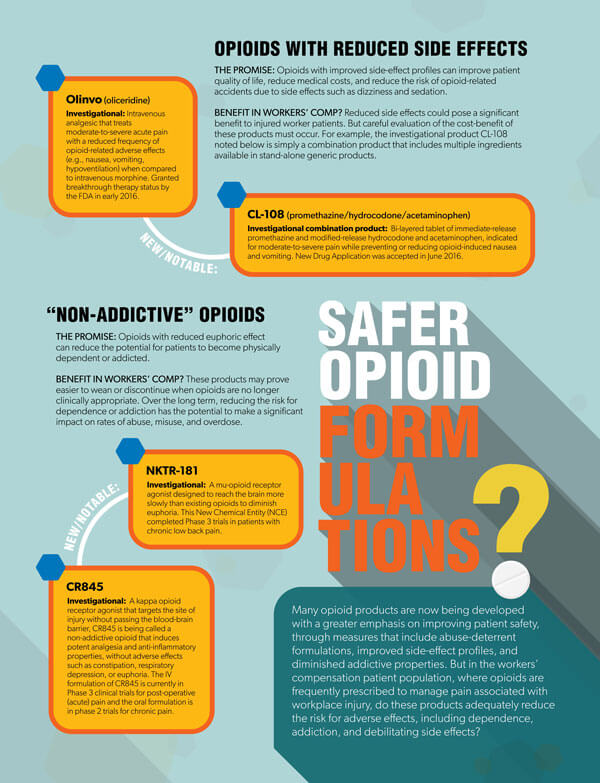