How to Treat a Lady: Drug Therapy Risks for Women in Workers’ Comp

FAST FOCUS: Trends show that women may face increased drug therapy risks with certain medications that are often prescribed within workers’ comp. While these trends may be associated with biology, they can also be traced to social behaviors such as gender-biased clinical research and prescribing differences between women and men. Awareness of these risks and their causes is critical to understanding the specific needs and considerations of injured worker populations.

When we think of injured workers, we often think of men in casts and crutches who were hurt in labor-intensive jobs related to construction, machinery or heavy lifting. This imagery, while very much a real part of workers’ comp, can dominate the minds of many and overshadow the significant portion of women in the injured worker population.

Women make up almost half of the workforce,1 and approximately 40% of nonfatal occupational injuries involve women.2 Women face many of the same risks for workplace injury as men, but when it comes to drug therapy, there exist certain gender-specific trends.

Commonly used in workers’ comp to manage pain from work-related injuries, opioids come with many inherent risks, as well as some gender-specific concerns.

All patients, male and female alike, face significant risks when it comes to opioids, but gender-specific trends demonstrate that women may be more susceptible.

To compound the problem, opioids are frequently prescribed along with benzodiazepines, despite serious, even lifethreatening risks of doing so.

Benzodiazepines are often prescribed in workers’ comp for anxiety, muscle spasms, insomnia, and other concerns. Injured workers taking prescription opioids may experience side effects such as insomnia and anxiety, which can lead to the prescribing of benzodiazepines.

Injured workers who experience reduced function can develop depression, which can hinder their ability to recover and require the prescription of antidepressants.

The CDC advises caution when combining antidepressants with prescription pain medications such as opioids.3 Women are more likely to visit an emergency department due to antidepressant use than men, and more women than men die from overdoses of antidepressants.3

One thing we must remember is that women and men have several biological differences, ranging from hormonal differences to dimensional differences in organs. Women may react differently to certain drug therapies, and they may exhibit different symptoms than men.

For example, research has shown that women experience more intense opioid cravings than men,15 and they become dependent on prescription pain medications more quickly than men.3 Women are also nearly twice as likely to experience adverse drug reactions overall.16 However, it is possible these risks stem from gender bias in medical research due to the fact that the female experience is not studied in enough depth.

Women are underrepresented in clinical trials, and there is no law or official policy that requires the inclusion of women in industry sponsored clinical trials.16

A lack of research, inclusion, and awareness leads to gaps in medical care. Interventions and testing may be tailored to the needs of men, leaving women with care that does not adequately meet their specific needs. For example, while clinical trials for depression treatments do include women, the trials may not examine outcomes by gender, and women and men may differ in response to depression treatment.17 Not taking such differences into consideration could lead to suboptimal care.

Furthermore, trends indicate that physicians exhibit different prescribing patterns when it comes to women and men. As noted earlier, physicians are more likely to prescribe women prescription pain medications such as opioids, as well as drugs such as benzodiazepines and antidepressants.

If women are not receiving care that is appropriate for their specific needs, their condition could worsen or complicate, or they may experience new or exacerbated adverse events. Ultimately, this results in poor injured worker outcomes. From a payer perspective, this prolongs the life of the claim and leads to higher medical costs.

WHAT CAN BE DONE?

Injured female workers benefit greatly when drug therapy adheres to evidence-based guidelines – particularly when it comes to potentially dangerous and addictive medications such as opioids and benzodiazepines. Mood-altering drugs such as antidepressants and antianxiety medications also warrant a closer look into the patient profile to determine if psychosocial concerns could be interfering with recovery, as depression and anxiety are often associated with opioid misuse.18

But superior claims management requires looking beyond drug therapies and towards the patient receiving them. Characteristics such as gender should be considered when managing a patient as those characteristics may have related trends and impacts. Patient characteristics are part of a holistic picture of health that can highlight intervention opportunities. 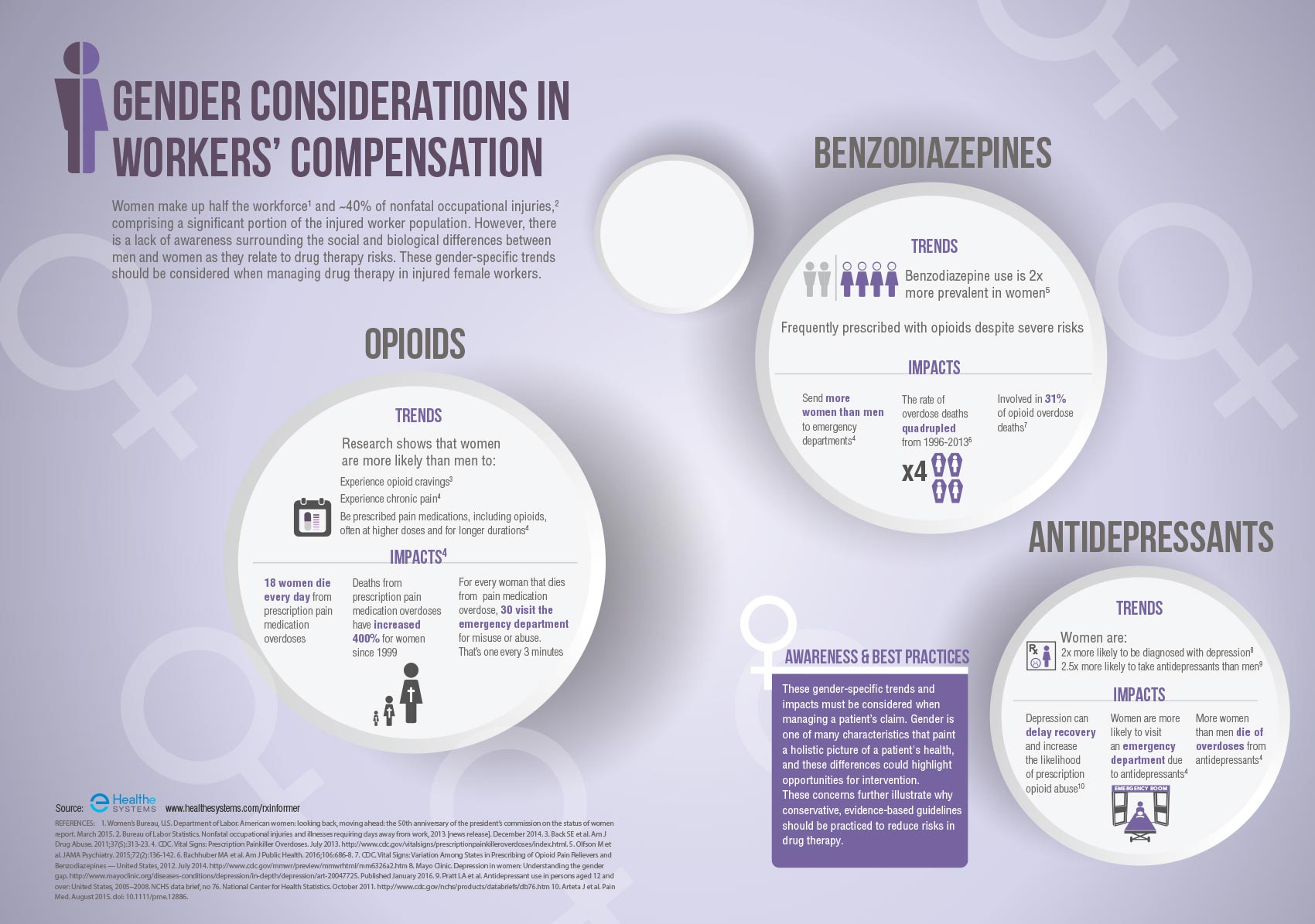