Perspectives: Use of Virtual Reality and Video Games in Physical Therapy

This interview originally appeared in the July 2017 edition of IAIABC’s Perspectives Magazine, and is reprinted here with permission.

How did you first get interested in virtual reality (VR) as a therapy modality?

My first exposure occurred during my rehabilitation affiliation in the outpatient department of a local rehab hospital. My mornings were spent working with people who had experienced spinal cord injuries and my afternoons were dedicated to people recovering from strokes. During the afternoon sessions I often found myself using a Biodex Balance System to work on balance during various reaching activities.

My next exposure came soon after the Nintendo Wii was released in 2006. I worked with it at the time and would incorporate it into the treatment plans of those patients with functional limitations that impacted their ability to independently perform activities of daily living.

How is VR currently being used in the occupational/physical therapy setting? What other settings is it being used in?

VR is currently being used in outpatient PT for more than just treating patients following a stroke. It is being used following back injuries, joint replacements, motor vehicle accidents, and more. I am aware that VR has become a larger presence in outpatient clinics – and rehab hospitals – across the country.

How prevalent is this type of treatment today?

In my experience VR is not an often used treatment modality. I think this is the case because it is not generally something that an outpatient therapist considers using. It sits outside their awareness and is not on their PT tool belt.

Can you explain or describe some VR experiences used?

I used the bowling and golf games that were part of the Wii Sports package. My goals in using each were different, but my purpose was the same. I wanted to engage the patient and provide and entertaining and interactive treatment experience that would serve as motivation for him or her.

When using the bowling game, my general goal was to improve the functional use of the involved upper extremity. Sometimes functional use might mean the re-introduction of a fuller range of motion (ROM), or it might mean teaching the role of arm swing during the gait cycle and its larger impact on balance and prevention of falls. 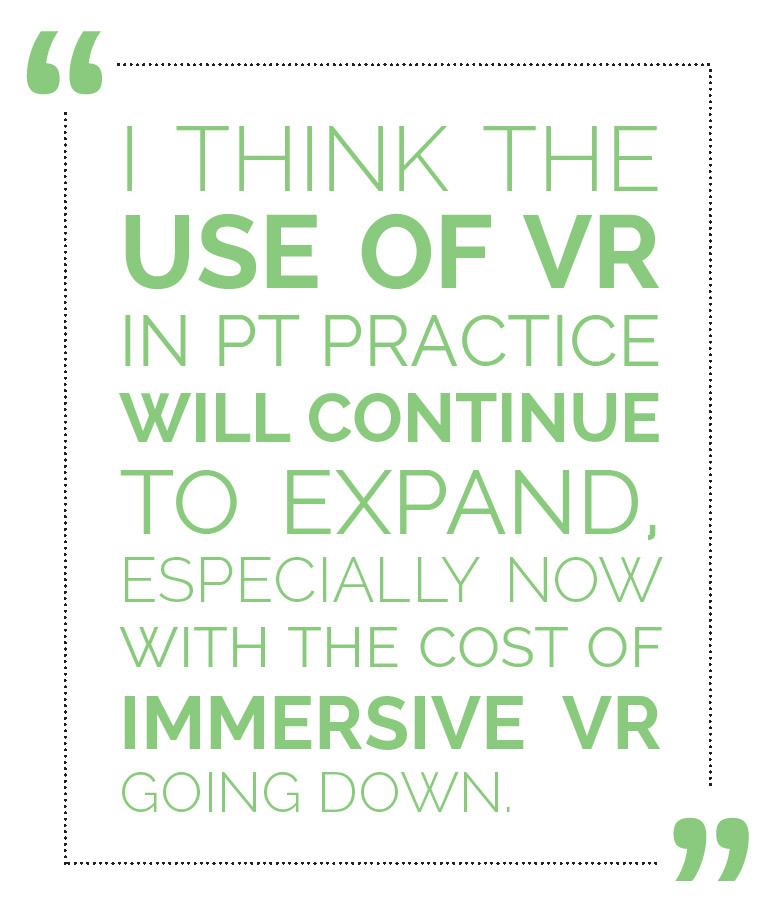 Use of the golf game meant that the patient’s goals were likely more about functional movements that involved weight shifting with simultaneous upper extremity movement. We do this every day without a conscious thought, but for people who have been injured it can be difficult to perform complex movements like these.

What kinds of injuries or accidents is VR being used for?

VR is best indicated following stroke, but I have used it for the following positive results:

Has there been success? Or, what kind of success has VR had in the world of vocational rehabilitation?

Absolutely! I personally have witnessed injured workers for whom VR was an integral part of their therapy. In most cases VR was a crucial step – early weight-bearing activity or improved motor control of the upper extremity – along the path to realizing their maximum benefit from physical therapy.

Could patients use VR modalities at home instead of the clinical setting? How would outcomes be measured?

Yes, patients could use VR at home, but managing outcomes would be more difficult. Physical therapists are trained to take manual measurements on patients with tools they have at their disposal in the clinic. One option might be to use VR in conjunction with a robust home exercise program that would minimize the need for the patient to attend regular visits in a physical therapy clinic. The patient could then attend PT for at regularly scheduled, less frequent intervals to be measured by a physical therapist.

How can workers with on-the-job injuries use VR interventions in rehab? Can you buy these games at Walmart yet?

Injured workers can buy games at Walmart that would be helpful, but they are still going to need to know when the right time to start incorporating them is, as well as skilled instruction until they are able to master things like proper posture, body alignment, plane of movement, velocity of movement, and so on.

In the future, how do you think VR will be used?

I think the use of VR in PT practice will continue to expand, especially now with the cost of immersive VR going down. It will become a valuable tool on every PT’s belt as they look for ways to engage their patients, deliver high quality care, and produce excellent outcomes.

Where do you see this going in the grand scheme of things?

I think the only limitations on VR are the constraints we place on our imagination. In considering the future of VR in workers’ compensation, a handful of questions come immediately to mind:

While it’s difficult to predict where VR will fit in the grand scheme of things, it has the potential to shift the physical therapy landscape significantly.