THE COST OF CARE: WHO IS GOING TO PAY?

FAST FOCUS: Evolving regulation and workplace practices are shifting or even blurring the lines between workplace- and nonworkplace injuries. In some instances, this raises the question: who is responsible for the cost of the patient’s medical care?

THE PUSH-PULL EFFECT OF AFFORDABLE CARE

More than five years after the Affordable Care Act (ACA) was enacted, the debate remains: is the ACA helping to reduce the number of injured worker claims, or is it actually directing more patients into the workers’ compensation system? In reality, there are drivers on both sides.

HOW THE ACA MAY PULL PATIENTS OUT OF WORKERS’ COMP

When the ACA was passed into law in 2010, it was predicted that, with more workers insured under private healthcare or Medicaid, the number of work related injury claims would decline. The rationale? Insured patients won’t feel like their only option for coverage is to submit a questionable claim through the workers’ comp system; they may be more inclined to seek care under their own insurance. 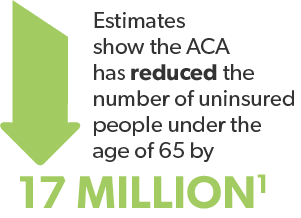 HOW THE ACA MAY PUSH PATIENTS INTO WORKERS’ COMP

Last year the Workers Compensation Research Institute (WCRI) reported findings that certain categories of injury tend to shift from group health to workers’ compensation when there is a capitated plan in play. The WCRI attributed this to financial incentives on behalf of the treatment provider. With more patients covered by capitated health insurance plans under the ACA, there is concern that a portion of injuries will shift into workers’ comp. These are typically soft tissue conditions, including non-specific back pain, where it may be more difficult to identify the specific cause of injury.2 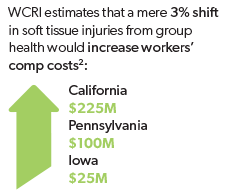 HOW THE ACA MAY PULL PATIENTS OUT OF WORKERS’ COMP

With employer incentives to implement wellness programs in their organizations, it should follow that their employees will be healthier. And a healthier workforce can mean less work-induced conditions or injuries. It can also mean that when injuries do occur, there is a potential for fewer complicating health factors and a faster recovery. 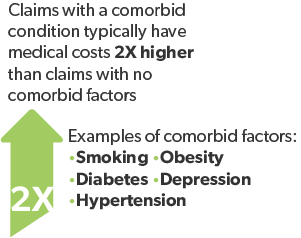 With all of this push and pull, where are things netting out?

Because we are still in the beginning stages of the ACA, it is difficult at this juncture to determine its overall net impact with any clear certainty. While the WCRI presents their case that capitated plans have historically created a shift in certain conditions toward workers’ comp, it is based on some assumptions that may not be fully applicable under the ACA. Conversely, one can look at Massachusetts, which passed state healthcare reform in 2006, and argue that healthcare reform similar to the ACA has coincided with the decline of workers’ comp claims – by nearly 17% between 2005-2009.4

It’s not just healthcare reform that plays a role in reallocating responsibility for medical care reimbursement. There are other trends that are blurring the lines. Telecommuting has continued to rise over the last decade. The latest Gallup Work & Education poll indicates that 37% of workers telecommute at least a portion of the month.5 More employees are also logging on and performing work functions during non-work hours. And in an even newer trend called “co-working,” individuals who do not work for the same company can come together in third-party office suites to work and collaborate under the same physical roof.

All of these factors potentially expand the criteria for what constitutes a work-related injury, and subsequently expands the gray area regarding financial responsibility for the cost of a patient’s care. If an employee suffers vehicular injury when taking a work-related call while driving, who is responsible for reimbursing that individual’s care? Depending on the circumstances, it could go in either direction. Workers’ compensation is no longer defined by traditional boundaries; and as these boundaries continue to expand and shift, it becomes even more difficult to ascertain whether an injury is work-related or not.

Case-shifting is a two-way street; in some cases, workers’ comp regulation can direct patients out of the system and into group health.

Republican leaders in Illinois are attempting to toughen the standards for proving whether an injury is work-related, which includes limiting the ability of an employee to claim injuries incurred when traveling to or from work. If such rules passed, it could narrow the criteria for what constitutes work-related injury, thus shifting some of these cases into the group health space. However, recent reports indicate that it is unlikely the proposed changes will pass.

Determining causality has always been critical when assessing an injured worker – not just due to the high rate of fraudulent claims within workers’ compensation, but to ensure proper diagnosis so that appropriate treatment can be administered. But with the expanding gray area, it becomes even more important to define parameters around which causality and liability are determined.

With all of these moving parts, alongside the pending change in our country’s leadership, only one thing is certain – the changes will continue to come. It is important that workers’ compensation professionals stay aware of disruptive trends, on both a national and state level, that have the potential to influence their claimant populations.