THE MAKING OF AN ADDICT

FAST FOCUS: As the ongoing opioid epidemic gives way to an upsurge in heroin usage, we examine where the injured worker fits into this growing threat.

Addict. The term once conjured a bleak image of needles shared in back alleys or seedy apartments; a dehumanized view of a life stripped bare of everything that defined the individual prior to their addiction and replaced by a singular purpose – getting their next fix.

However, the face of heroin addiction has changed dramatically over the past decade, in large part due to an uptick in usage that coincides with the ongoing opioid epidemic. The rate of deaths related to heroin overdose within the United States increased four-fold between 2002 and 2013.1 Notably, prescription pain medication misuse also increased four-fold during a similar time period.2 This is no coincidence. The CDC has identified addiction to prescription opioids as the number one risk factor for heroin addiction.1

The injured worker population is particularly susceptible to this trend. People who are hurt on the job are often prescribed opioid analgesics to manage their pain. Unfortunately, the high rate of opioid prescribing among injured workers can also increase the risk for dependence or addiction within this population.

But as the face of heroin addiction continues to change, what hasn’t significantly changed is a prevailing attitude that addicted individuals are beyond help or hope. Unfortunately, the dismal rates at which heroin users successfully undergo treatment for their addiction don’t do much to dispel this perception. Only 11% of people who need specialty treatment for a substance use disorder (including heroin use) receive it.3

With statistics like these, one has to step back and take a look at where we can be doing better. Specifically when it comes to the injured worker, where are the breakdowns within the workers’ compensation care system that allow an individual to devolve from patient to addict?

OPIOIDS AS A GATEWAY

Like a hurricane, opioids can leave a broad and devastating trail, with destruction that reaches well beyond the center of the storm. These prescription pain medications bear significant morbidity and mortality in their own right. In the short-term, opioids can have adverse effects on the body that include digestive system disturbances, respiratory depression, and changes in mental status that may include confusion or agitation. The long-term health and financial impacts of opioid misuse are significant. The CDC estimatesthat prescription pain medication overdose kills 44 people every day.4 From a workers’ compensation standpoint, opioid misuse often derails recovery in the injured worker. This can delay the person’s ability to return to work or even to carry out typical daily activities. In fact, opioids may very well be the greatest barrier for patients getting back to work. Chronic work loss is six times greater for patients who are prescribed a schedule II controlled opioid.5 From the insurer’s standpoint, delayed recovery translates into longer claim durations, keeping injured workers from returning to work and cementing the healing process, as well as significantly increasing indemnity and medical costs. 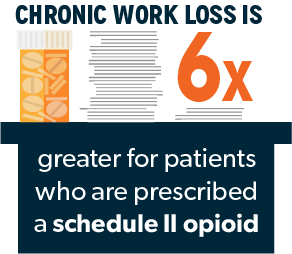 Despite the myriad risks associated with opioid medications, inappropriate prescribing in the injured worker population remains a concern. We continue to hear stories of patients who were prescribed opioid analgesics for a headache, a back strain, or a – insert minor injury with no proven medical need here! – and the path of addiction was initiated. This is not a cautionary tale but the unfortunate reality. Individuals who are addicted to opioids are forty times more likely to develop a heroin addiction.1

Although the largest increases in heroin usage have been among youth (a byproduct of drug diversion and recreational use), adult populations are seeing significant increases. Heroin usage has risen by 58% over the last decade among adults older than 26 years of age1 – an age group that represents a significant portion of the workforce.

In addition to the devastating impact of addiction on the individual and his or her family, there is a growing burden of disease and cost to the healthcare system and society overall. Along with deaths caused by heroin overdose, there are a host of other factors contributing to the significant morbidity and mortality associated with heroin usage. The most notable trending health risk associated with heroin usage in the last decade is the rising incidence of new (acute) cases of hepatitis C virus (HCV). The virus spreads at high rates in populations using heroin due to the sharing of contaminated needles. Nearly a third of states reported a 200 percent increase in acute HCV cases from 2006-2012.6

The good news? The new antiviral medications for HCV are highly effective. If it weren’t for the rising infection rates due to burgeoning heroin usage, we may have been a step closer to curing the disease. But these treatments come at a steep cost. One analysis estimates that the annual cost of care for patients with HCV increased from $7 to $21 billion following introduction of the new antivirals onto the market.7 The same researchers also estimate that it will cost $106 billion over the next 25 years to make HCV a rare disease.

This is of course assuming that patients get treated at all. Half of the 3 to 4 million people who are infected are unaware of their HCV status – and of the ones that are, only a portion of them are treated.8

As we try to overcome the challenges in identifying and treating current HCV infections, we also need to stop new infections from occurring. Similarly, as we address the existing challenge of heroin addiction and its health consequences, at the same time we must focus on prevention.

A RESPONSIBILITY FOR ACTION

Those of us in the workers’ compensation industry have a unique opportunity to be on the front line of preventive efforts against opioid misuse and its even darker sequel, heroin addiction. We are well-versed in the risks that opioids pose to the injured worker, and we have developed tools and resources that encourage responsible opioid prescribing. We are trained to recognize the early warning signs of opioid misuse. And when these red flags do arise within the individual’s treatment (e.g., multiple prescription pain medications, high-risk drug combinations, prolonged opioid usage or higher-than-recommended dosages), we have the knowledge and ability to intervene with discontinuation or addiction management strategies as appropriate. These efforts are typically undertaken in workers’ compensation with very specific goals to speed the patient’s recovery and return to work, and to reduce overall costs. However, when these strategies are applied effectively, they can also significantly reduce risk for misuse and addiction.

But with patients continuing to slip through the cracks, we must be critical of ourselves as an industry. This means acknowledging where the system is failing – and coming up with new and better solutions. And it also means using the tools we already have more effectively. There is a lot we’re doing right – but there’s much room for improvement. Collectively, we have the potential to influence care of the injured worker in a way that reaches beyond workers’ compensation to impact the individual’s family, their community, and the healthcare system. There is just more work to be done.