In the world of prescription drugs, the evolving market is bringing new opioid formulations likely to have a significant impact on the workers’ compensation industry. Several new opioids have recently been approved by the FDA and soon will be released to the marketplace, while a few others are currently in development. Given the rampant use of opioids in the workers’ compensation population and their effect on long-term claim costs, the potential impact of these products warrants a closer look.

The most interesting of these products is Zohydro, an extended-release hydrocodone product currently in Phase 3 clinical trials from manufacturer Zogenix. Hydrocodone is currently available as an immediate-release opioid, but only in combination with other medications such as acetaminophen (Norco®, Lortab®, Vicodin® are the most popular combination products). Unlike these currently available hydrocodone products, Zohydro will not be in combination with acetaminophen or ibuprofen; it will also be an extended-release opioid. Unlike the newly marketed abuse-resistant formulation of OxyContin, Zohydro will likely not be crush-resistant, leading to concerns about its abuse potential.

Apart from Zogenix, three additional pharmaceutical companies are currently working to produce a new “pure” formulation of hydrocodone. Zohydro will likely be first to market, with a launch slated for late 2012 or early 2013. It is expected to be a strong competitor to OxyContin for a share of the long-acting opioid market. Like OxyContin, Zohydro should be designated as a Schedule II controlled substance. Zohydro will likely become a highly prescribed medication in the workers’ compensation population due to prescribers’ familiarity with hydrocodone, the most prescribed medication in the U.S. As a new brand drug, the cost of this medication is expected to be higher than the currently available hydrocodone/acetaminophen products, so widespread use in workers’ comp could have a significant impact on drug spend.

In June 2011, the FDA approved Oxecta, a new immediate-release (IR) oxycodone formulation that is now available in pharmacies. Oxecta is indicated for the treatment of moderate-to-severe acute and chronic pain. Unlike other IR oxycodone products, Oxecta is specifically designed to be abuse-deterrent, with properties meant to discourage the injection of dissolved tablets or snorting of crushed tablets. Marketing of Oxecta is likely a response to the growing abuse of immediate-release oxycodone. Prescribers seeking to discourage opioid abuse may turn to Oxecta as an alternative to other immediate-release formulations. Oxecta should be used only for patients who require an abuse deterrent product (i.e., a history of substance abuse or abuse potential has been identified). Oxecta is significantly more expensive than the generic oxycodone IR products. Payers should be modifying drug formularies appropriately, and ensuring only patients meeting the defined criteria are being treated with this drug.

Other opioid formulations that continue to deserve attention are the rapid-release fentanyl (RRF) formulations – Abstral, Onsolis, Lazanda and Subsys. Seeking to capitalize on the marketing success of Actiq and Fentora – with 2006-2010 sales estimated to be in excess of $1.5 billion – these newer RRF products use unique delivery systems to provide the ultra-potent opioid fentanyl to the user. It is well-documented that an opioid’s abuse potential is directly linked to how fast the drug reaches the blood stream and the brain. Therefore, the abuse potential of RRFs, where the fentanyl is delivered either sublingually (Abstral), as a nasal spray (Lazanda), or by being absorbed by the mucosa in the cheek (Onsolis) is concerningly high. This has led the FDA to require manufacturer-sponsored programs, known as Risk Evaluation and Mitigation Strategy (REMS) programs to restrict the use of these medications. Onsolis, for example, is available only to patients, physicians and pharmacies that register with the manufacturer, and requires secure, direct-to-patient mailing. Under their REMS requirement, Lazanda and Abstral require prescribers and pharmacies to register with the manufacturer before dispensing.

These and other RFFs could continue to impact the opioid landscape in the United States as additional formulations continue to be developed. With the U.S. market for RFFs currently valued at over $500 million annually, all estimates project the use of these “novel” opioids to continue rising. 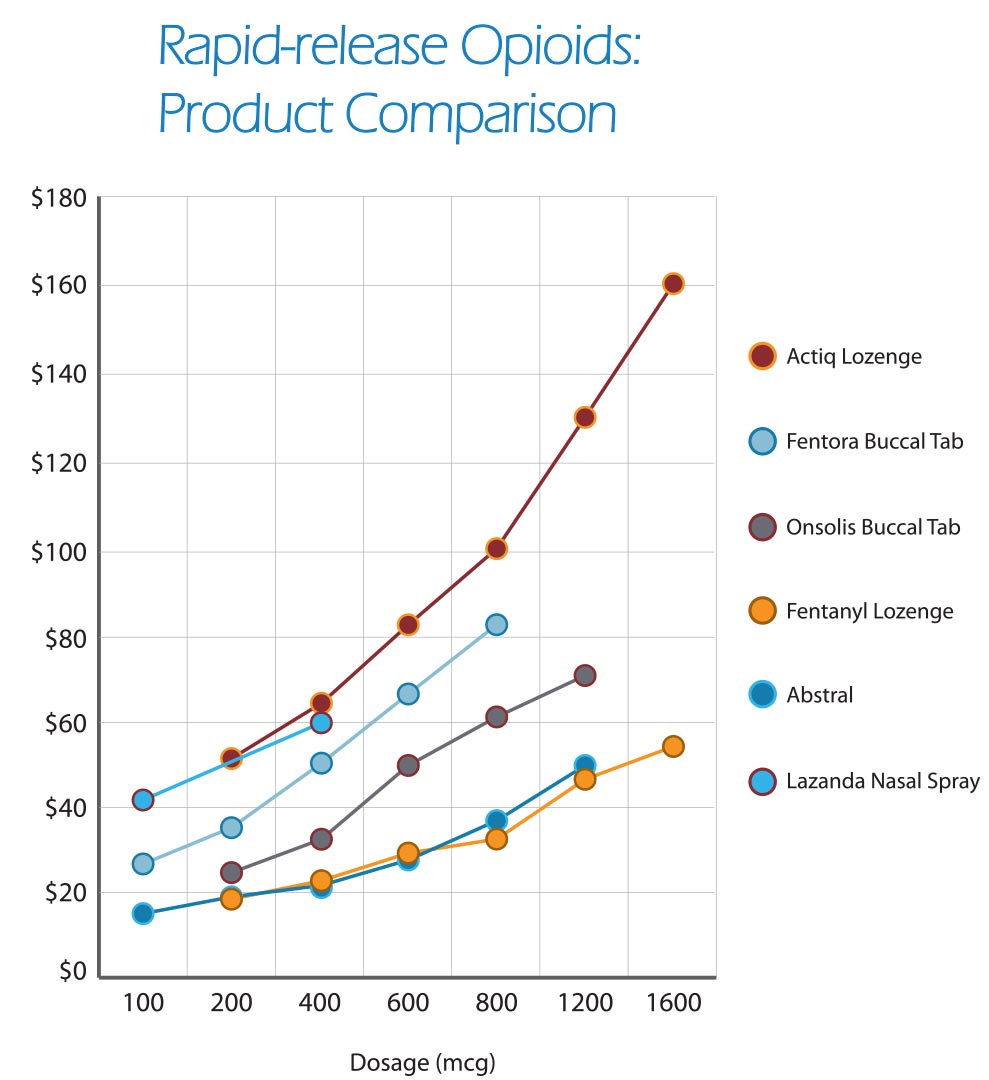