Head injuries and concussions have recently gained increased exposure in the media, with particular focus on football and other sports related injuries. Concussions and head injuries are not new problems; however, the spotlight is now shifting to the long term effects of these injuries. The workers’ compensation industry is also affected by long term medical coverage for head injuries occuring in the workplace. The reported incidence of workers’ comp traumatic brain injuries range from 6 per 1000 claims to 17 per 1000 claims.1,2 Although not the largest category of workers’ compensation injuries, drug therapy for this condition warrants evaluation.

The most common cause of mild traumatic brain injury (mTBI) is falls, followed by motor vehicle accidents and injury due to strike by or against an object.3 The extent of damage can range from mild to severe. While the consequences of a severe traumatic brain injury can be extensive, the majority of patients do not require long term medical therapy.4 Incidences of lasting effects from mTBI occur in less than 5% of cases. If persistent symptoms do occur, first line therapy includes education and non-drug treatment such as cognitive behavior therapy, physical therapy, relaxation techniques and modification of the home environment.

The 2009 Department of Defense/Veterans Administration Clinical Practice Guidelines state that in nearly all cases, non-drug treatment should be a main focus and medications should be secondary considerations and targeted to the specific symptoms. Since there may be multiple conditions resulting from mTBI, treatment may involve several drugs. Given the increased risk for adverse effects and drug-drug interactions in this population, it is recommended that response to therapy is documented and that long-term use of medications is critically evaluated and monitored. Evaluations should include stopping treatment if symptoms have resolved.5 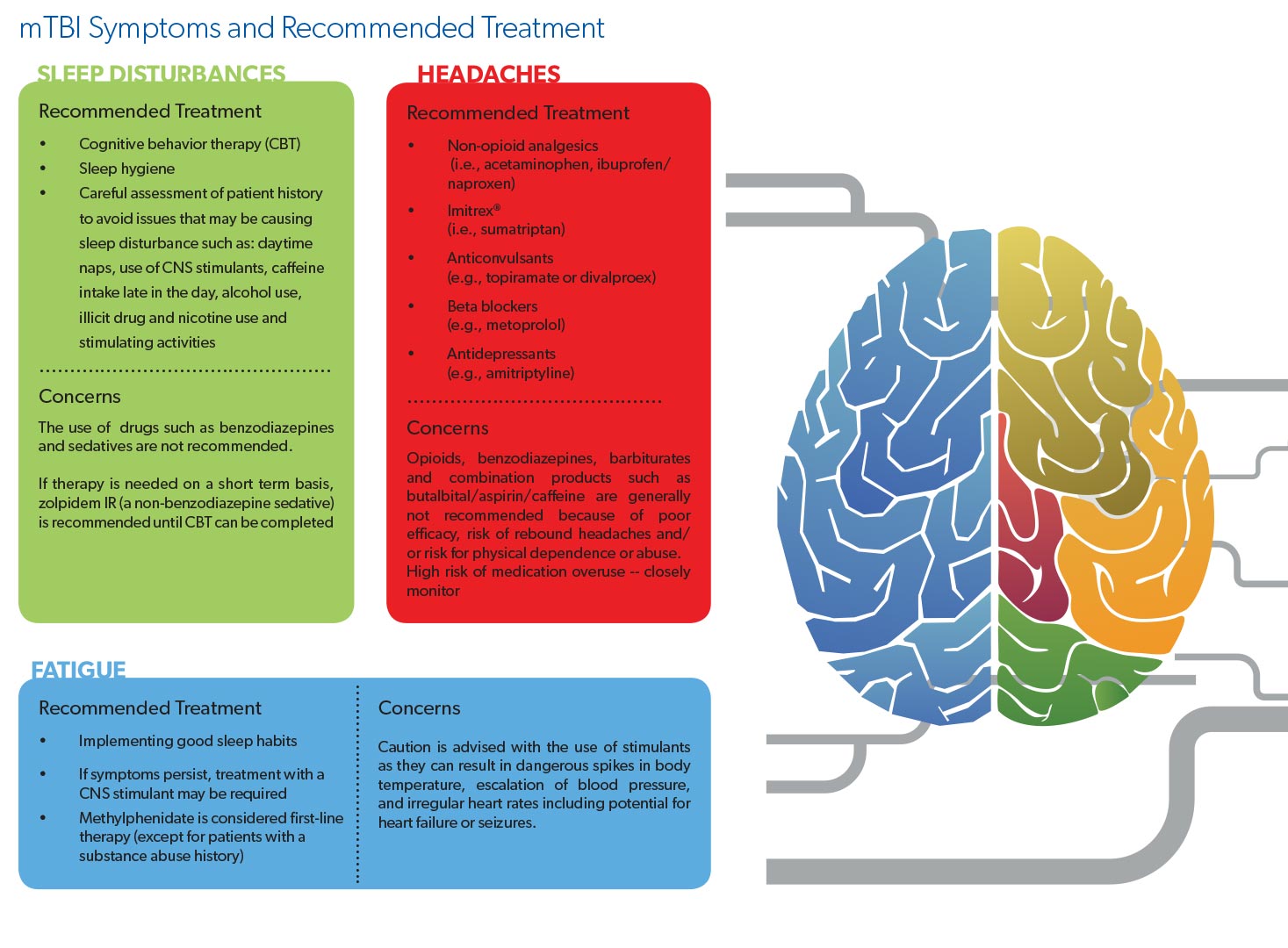 The residual conditions associated with mTBI are varied and the list of potential effects is extensive. The graphic above illustrates some of the more common symptoms, recommended treatments and concerns that should be taken into consideration.

Studies of TBI show that these patients tend to be more sensitive to medication effects.6 Therefore, all medication use should be carefully evaluated. The general rule of ‘start low and increase doses slowly’ is advised.7,8 Caution is also advised when combinations of medications are prescribed since side effects can be cumulative. Additionally, combining medications with similar side effects can increase the likelihood of these side effects occurring. See the table below for possible side effects. Additionally, circumstances such as age, co-morbid conditions such as diabetes, hypertension and cardiac disease all must be considered when selecting the most appropriate drug therapy. A comprehensive medication review by the patient’s physician may help eliminate unnecessary medications, identify potential medication reactions, and ultimately provide a safer regimen for the injured worker. 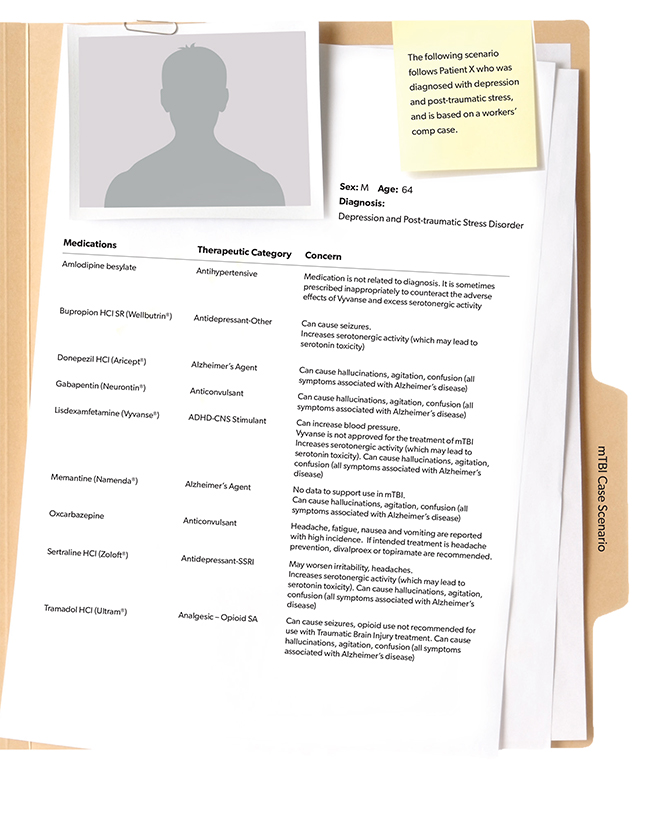 A thorough review of the Patient X mild Traumatic Brain Injury scenario above was conducted by a Healthesystems clinical pharmacist. An analysis of the medication profile identified several concerns. The use of multiple medications in this regimen may actually worsen the patient’s condition. Since a consideration for all mTBI patients is an increased risk for seizures, the use of medications associated with potentially lowering the seizure threshold should be avoided. Therefore, the concurrent use of oxcarbazepine and gabapentin (anticonvulsants) with bupropion, tramadol, and lisdexamfetamine is concerning, since all of these medications can cause seizures.

Further examination raised the question of certain drugs’ relationship to the patient’s injury including memantine, amlodipine, and lisdexamfetamine. Memantine is approved for the treatment of Alzheimer’s disease, and is not recommended to treat mTBI. Amlodipine is used for the treatment of chronic stable angina, vasospastic angina, coronary artery disease, and hypertension. There is no known diagnosis related to mTBI to support the use of this drug. Lisdexamfetamine is likely being prescribed to treat fatigue associated with mTBI; however, the preferred agent is methylphenidate. Based upon the injury and diagnosis, there is no known therapeutic reason for lisdexamfetamine to be prescribed for this patient.

The case study above demonstrates a good example of possible inappropriate polypharmacy, with several medications being prescribed to treat the adverse effects of other medications.

An even deeper review of the above drug regimen reveals:

Although this case is complex, and may require the use of multiple medications, an analysis performed by Healthesystems clinicians revealed that the selection of drugs does not follow recommendations of the current guidelines. Communication with the prescriber regarding the intended use of each prescribed medication is imperative and is the next step in eliminating unnecessary or potentially harmful drug therapy. It is not uncommon for claims such as this case study to spin out of control when multiple medications are involved and when the treatment is complex. The costs associated with these types of claims are detrimental – both to the payer in terms of drug cost and the employer in terms of lost work, but more importantly to the patient, in terms of the cost to their health and well-being. Close involvement by clinicians can help to curb excessive and inappropriate drug use, and ultimately, deliver a better outcome for the payer and the patient.

The table below provides a look into medications which may be used to treat injured workers with mTBI. Claims professionals should pay close attention to the potential side effects of the drugs listed as well as possible drug interations that could occur. 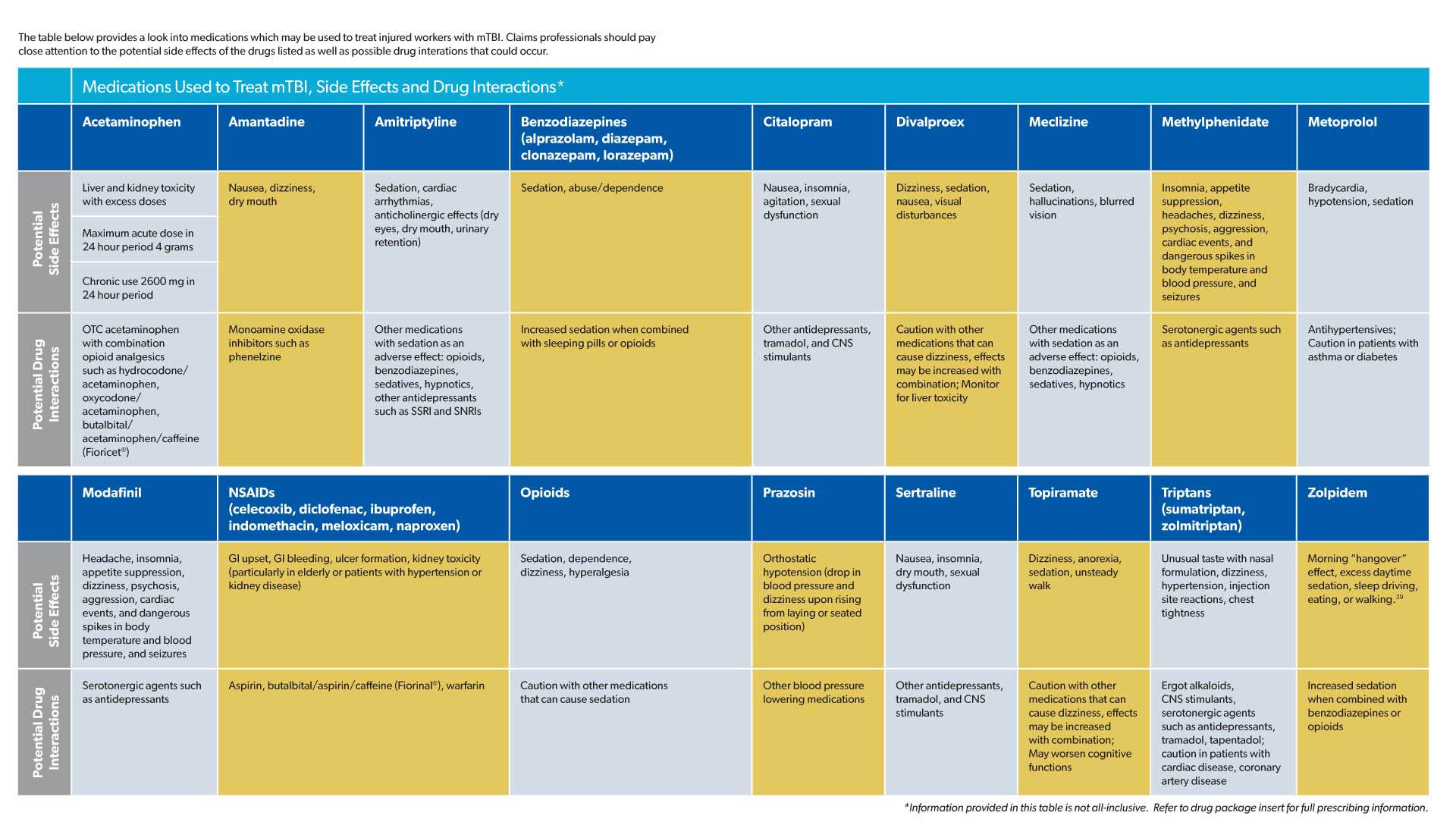